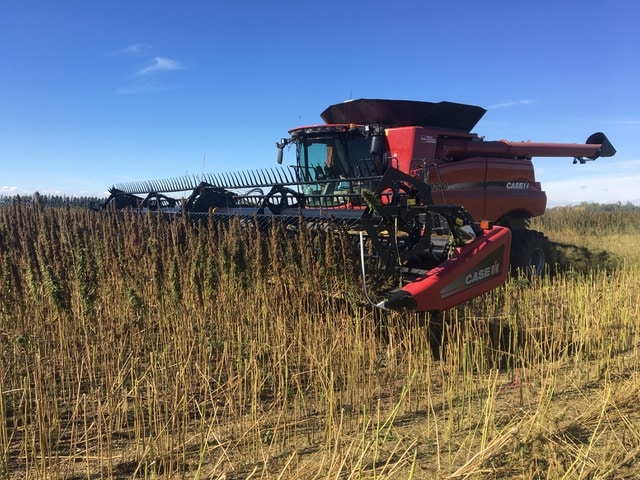 You may consider including wording in your Certified Hemp Seed sales contracts and spot sales agreements which forbids using that cultivar in non-pollination and/or indoor production systems.

Concern has been noted by some CHTA members regarding the use of approved hemp cultivars (LOAC) in non-pollination (removal of male plants) and/or indoor (intense light/temperature/humidity/nutrition management) production systems.  Seed companies are confident in their existing cultivars that are registered on the List of Approved Cultivars (LOAC) when produced in the broadacre (large scale outdoor production with pollinated plants) production model. The pedigreed seed growers monitor THC levels to confirm that their cultivars are stable and produce plants with less than 0.3% THC w/w in the flowering head.  Based on this demonstrated stability, THC testing is no longer required by Licensed Industrial Hemp Cultivators.

A relatively small number of licensed industrial hemp cultivators are using non-pollination (removal of male plants) and/or indoor (intense light/temperature/humidity/nutrition management) production practices.  Some hemp seed companies are concerned that using either or both of these production practices increase the overall cannabinoid content in the flowering heads, including increasing the THC content. The primary concern is that the THC content could increase beyond the regulated maximum level of 0.3% w/w in the flowering heads (flowers, leaves, and branches).

Hemp seed companies are concerned that Health Canada could take regulatory compliance action against the cultivar owner if random sampling identifies plants of an approved cultivar (LOAC) that are over the 0.3% THC regulated maximum.  Such regulatory action may include: a cautionary note on the LOAC; requiring IHR licensed cultivators using that cultivar to conduct THC field sampling; and/or removing that cultivar from the LOAC.

A number of hemp seed companies have taken the precaution of including a statement in their sales agreements to disallow non-pollination and/or indoor production practices.  It is the opinion of these seed companies that the potential for non-compliance is a result of non-authorized production practices and not the stability of their cultivars. As such, the seed companies believe that any regulatory compliance actions should be applied solely to the IHR licensed cultivator using non-pollination and/or indoor production practices. Such regulatory action may include: an official warning; increased surveillance; shorter license renewal periods; destruction of the crop; and/or cancellation of their IHR cultivation license.

1. Confirmatory THC trials on new cultivars seeking registration on the LOAC must be completed in Canada.  A minimum of three statistically sound and well-designed experimental trials must be completed to confirm that the new proposed cultivar routinely produces less than 0.3% THC w/w in the flowering heads and leaves (female inflorescence only).  The 3 trials can be tested indoors or outdoors. There is no requirement to test in more than 1 region. Testing can be completed simultaneously. Testing can be completed on pollinated or non-pollinated plants. The potential therefore exists to simultaneously conduct the THC trials with at least 3 sets of replicated “plots” in 1 greenhouse.  Foreign data can support the THC testing, but cannot replace the 3 Canadian trials. The applicant must demonstrate that the trials reflect the commercial growing environment (i.e. indoor trials must be linked to outdoor production).

3. Minimum credentials for samplers have been included in the new rule.  Sampling must be conducted by a provincially designated professional or technical Agrologist (or equivalent for those provinces having no such designation process), with experience in crop production and sampling, or by a pedigreed-seed crop inspector recognized by the CSGA.  Health Canada has not indicated a requirement for agronomy training or certification for samplers.

4. More flexibility in test methods have been allowed.  Previously Health Canada proscribed that only Gas

Chromatography could be used for assessing the level of THC in the flowing heads and leaves.  The advantage of this requirement was that all testing was done on a consistent basis, with a direct measurement of total available Delta-9-THC.  The disadvantage of this requirement was the exclusion of other indirect testing methodologies (i.e. High Performance Liquid Chromatography, Ultra-High Performance Liquid Chromatography, Supercritical Fluid Chromatography, Thin-Layer Chromatography, Near-Infrared Spectroscopy, Fourier-Transform Infrared Spectroscopy, and  LC-MS) that separately estimate Delta-9-THC and THCA. The formula for calculating total available THC (based on molecular weights) is: Delta-9-THC% + (THC% x .877). This indirect calculation will always result in an over-estimate of THC and the decarboxylation of THCA is not 100% efficient. Heath Canada has not provided a list of THC testing methodologies that they will accept.

A. Will industrial hemp grown in Canada still be required to be grown from planted Pedigreed hemp seed of at least Certified status that has been purchased from a member of the Canadian Seed Growers’ Association?  Health Canada has referenced seed status in sections 5.a)i. and 5.a)v of the policy. That said, the policy requires that a variety must be a recognized as a true variety by responsible authorities (in any country) and that a completed “CSGA Variety Certification Eligibility Application” must be provided.  There does not appear to be a requirement for confirmation from CSGA that the proposed new cultivar has already been recognized as a new Variety in Canada. This allows for some level of interpretation – potentially leading an applicant to believe that a cultivar without Pedigreed recognition from CSGA may still be allowed on the LOAC; as long as the Variety application has been submitted.  If the intent is to list only Pedigreed Seed of at least Certified status from CSGA-recognized cultivars on the LOAC, Health Canada might consider making this explicit.

D. What regulatory compliance action would Health Canada take if a random sample of industrial hemp grown from an LOAC cultivar in non-pollination (female plants only) and/or intensive indoor production systems?  Would such action be taken against the cultivar owner if random sampling identifies plants of an approved cultivar (LOAC) that are over the 0.3% THC regulated maximum being produced in non-pollinated and/or intensive indoor production systems; potentially including a cautionary note on the LOAC, requiring IHR licensed cultivators using that cultivar to conduct THC field sampling, and/or removing that cultivar from the LOAC.  Would such action be taken on the Licensed Hemp Cultivator, if the seed company had included a statement that the cultivar cannot be used in nonpollinated and/or intensive indoor production systems. Some hemp seed companies have taken the precaution of including a statement in their sales agreements to disallow non-pollination (removal of male plants) and/or indoor (greenhouse) production practices.

HGI partners with dealers positioned throughout Canada and the US to facilitate the efficient movement of seed to customers based on the varieties most suitable in the region.